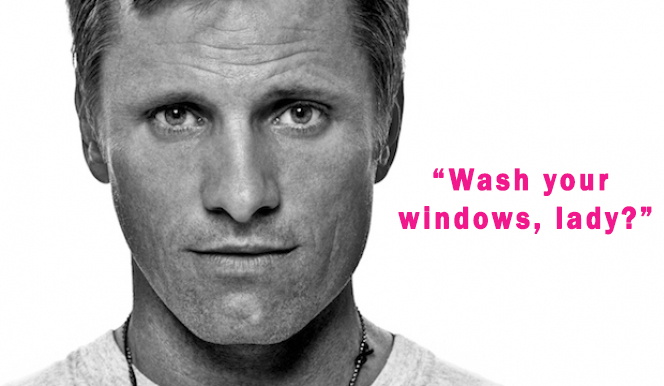 Greetings Jaye Hawks! Hope everyone out there in our altered world is staying (relatively) sane. I know that I, for one, am champing at the bit big-time to get “back to normal.”

On that fifty-thousand-dollar question, we will not dwell. No, JC is here to briefly take your mind off such matters. For this installment of What Say?, I’m harkening back to another not-to-be-believed blast from my checkered past. Not quite as far distant as my Cringeworthy Childhood Embarrassments (see Blog 15), this pretty parable occurred four houses and a dozen-plus years ago.

(What can I say… Me and the Mister move around a lot.)

I’m entitling it The Window Washer Chronicles. Let me assure you, it’s a doozy. And completely, 100%, bullshit-free. Trust me… Even with my fervid imagination, I couldn’t begin to make this crap up!

The sordid details drifted back to me the other day, as my housebound self was gazing out filthy-dirty panes of glass, wishing the streaky suckers would magically clean themselves, inside and out. Or better yet, that Viggo Mortenson or some stud of similar hunkiness would appear before me, squeegee in hand, to offer sudsy assistance.

Hey, come on… A girl can dream.

Back then, I’d been desperate for a thorough, yet reasonably-priced scrubbing of the fifty-three decrepit windows in our oversized Money Pit: the century-old Tudor friends and family decried me and mine “insane” for having purchased. After slaving forever on all manners of dull and costly repairs, my other half grudgingly agreed the time had come to be able to look out the glass and actually see something, other than one hundred years’ worth of grime.

Putting the word out on the street, it hadn’t taken long for Sonya H, my cute and vivacious neighbor two houses over, to offer her enthusiastic recommendation.

“Look no further! I have the perfect guys!”

Contact info was exchanged, and the call was made. I remember being surprised at how quickly I was put on the schedule. Quickly as in, the very next day.

Lucky me: must have snagged a cancellation. Sweet!

After the boss man quoted me a ludicrously low number (sight unseen) and a bargain was struck, I was informed “The Boys” would be on my porch with equipment come morn, ready to roll at eight am sharp.

Oooh, I couldn’t wait. After five long years, I’d finally be able to count the weeds on my dandelion-pocked front lawn with crystal-clear clarity. Yippee!

The ol’ ball and chain left for work bright and early as usual; Hubby advising me with cool savvy “Not to leave too big of a tip.” (The man can be brutal that way.)

I waved him off, scarcely able to contain myself. Lord, it was a dream come true. Not only would my glass soon be gleaming like polished mirror, I figured there was at least a ten percent chance one of the washers could pass for a hot film star of European descent.

I can’t say the guys weren’t punctual. Smack-dab on the bong of eight, a brisk rat-a-tat-tat sounded on my termite-ravaged door. Throwing the thing open with a wide smile, I peered out, ready to greet Viggo et al. with open arms. Already thinking: What would I serve these hard-working chaps for lunch, and their late-afternoon snack?

Blinking, I did a double-take. Then, I looked past the trio of 90-pound scarecrows swaying on my stoop for the real crew.

“Um, where’s all your stuff?” I managed to squeak out. (My house was three stories high, tall as they come.) The red-whiskered beanpole in the middle piped up, grinning around stubs of nicotine-stained teeth.

Actually, it was more like “Gahtitawwlherelaidee,” but I’d always been proficient at the fine art of lowlife interpretation.

My heart sank as I gazed upon the string beans three, each holding a small sponge the size of a bean burrito. At their threadbare boots stood one bucket (yes, one) to suffice for a four-thousand square foot abode. Thrown on my crabgrass was a sad-looking wooden ladder that could’ve been a prop from Dorothy’s farm in The Wizard of Oz, missing a rung or five.

My mouth opened once or twice, but nothing of import emerged, such as “Leave immediately. You’re fired.” I guess I was just too dumbfounded to sputter out two simple sentences. Taking my gaping fish-face for permission, the scraggly vagabonds wasted no time slipping past me, scattering in my finely-appointed home like a booze-scented scourge.

One charmer flew up my grand double staircase. Another disappeared into the iron-gated “music room.” The third creature vamoosed up the back so-called “bat staircase” leading to the occupied-but-not-by-humans third floor. (Please don’t ask. I remain traumatized, to this day.)

That’s when the fun began.

I ran after “Music Room,” pleading with him to be careful with the velvet drapes. My entreaty fell on deaf ears, as I watched two grubby paws fling aside plush fabric, leaving dark marks.

Hearing a loud crash followed by a hideous howl up above, I abandoned him, racing upstairs to find “Master Bedroom” blubbering in the center of my newly installed carpet, dripping anemic blood all over gold tufted wool.

I took this to mean the ancient window sash had slammed on his sapling-thin arm. Marvelous. The first freaking window touched, and I already had a crime scene on my hands? Cringing at fat splots of crimson soaking into the fibers, I commenced to lose it; herding the klutz into the bath and shrieking for him to “Wait there.”

Careening down to the kitchen, I procured a rubber glove, charging back up twenty-eight steps to throw it in his face. While he was smoothing it over sallow skin and bones, taking his sweet-ass time, I struggled to recall best method to remove blood stains and not strangle him where he stood.

Before I could do either, another unsavory sound echoed from parts unknown.

This would be Clown Number Three, sloshing the lone bucket’s already-filthy contents (this dude was the most ambitious of the lot) all over the back of the silk-covered settee he’d been too lazy to move.

Hawks, I do not exaggerate when I tell you I lost a good five pounds that fine, sunshiny day, chasing three hungover stooges all around my many-roomed mansion. As soon as I succeeded in getting ten filthy fingers off one set of custom-made curtains, it was back up three flights, picking up the shards of a busted floor lamp.

I do remember I tried to call The Mister multiple times for backup, but he wasn’t answering. No way. Being in the remodeling biz, the cagey devil likely suspected a string of calls could only mean trouble with a capital T. Each time I slammed down the phone, I could hear him tutting sagely to himself… “You hired ʼem, babe. You deal with ʼem.”

Here’s the thing. I do know the Bumbling Brigade darkened my doorways for that entire day, but after a while, the details turned fuzzy as the hems on their baggy trousers. I think all those trips up and down the stairs must’ve depleted my brain cells or something.

Truthfully, I can’t even recall which one of the all-stars fell off the (thankfully bottom third) of the shitty ladder onto my cracked and pitted driveway, leaving more DNA stains I could do without. I’m pretty sure it was the one with the tat of Popeye on his neck (Dream on, guy. You got a helluva lot more spinach to eat.), but I can’t swear to it.

I can swear none of them got any lunch, nor any tasty late-afternoon snack.

Not after I happened on ol’ Red SITTING ON MY MASTER BEDROOM COMMODE, DOOR WIDE OPEN, HAVING HIMSELF A NICE POOP, THE LATEST ISSUE OF ROLLING STONE IN HIS HAND.

I am totally serious with this (pardon the pun) shit.

Like my winged attic dwellers, another memory from which I shall never, ever recover.

It was after six when the boss showed up in a rusted jalopy to collect his charges. They’d logged a solid, ten-hour shift under their raggedy belts, which I guess is all one can expect from a crew armed with three puny sponges, a bucket, and a prop from a 1939 Hollywood Classic.

Despite the toll taken on my property and on my nerves, I grudgingly reached for my checkbook. Because, no lie, I had to admit the windows looked way better.

Hell, my crabgrass had never looked so brown!

“No checks lady, cash only.”

Boss Man leered into my face, nodding toward his minions.

“And NO tips. They’d only spend it on firewater, the minute I unload their sorry asses.”

Well, that explained the light-a-match-and-watch-me-explode odors wafting out each man’s emaciated pores. Sheez, I was lucky I had the cashola on me. Even luckier I didn’t have to make up a lie to You Know Who about the generous tip I usually doled out.

But not lucky to find a whole plethora of additional jaw-clenching damage (think fabric, carpet, and assorted bric-a-brac) after Simon Legree and his slave labor pulled away from the curb, that sad ladder half-dragging on the street.

The worst part? Hazmat gloves on, I had to deep-six that Rolling Stone in the outside garbage. And the sucker had just shown up in the mail the day before. In hindsight, I should’ve made Sonya spring for a replacement issue.

You know? After indulging in that little trip down memory lane, I changed my mind. Viggo or not, guess I’ll wash my own damned windows.

Well, until next time, my pretties. Stay safe, and keep it real. Remember to follow me on the following platforms… There’s always something I’m hatching up!