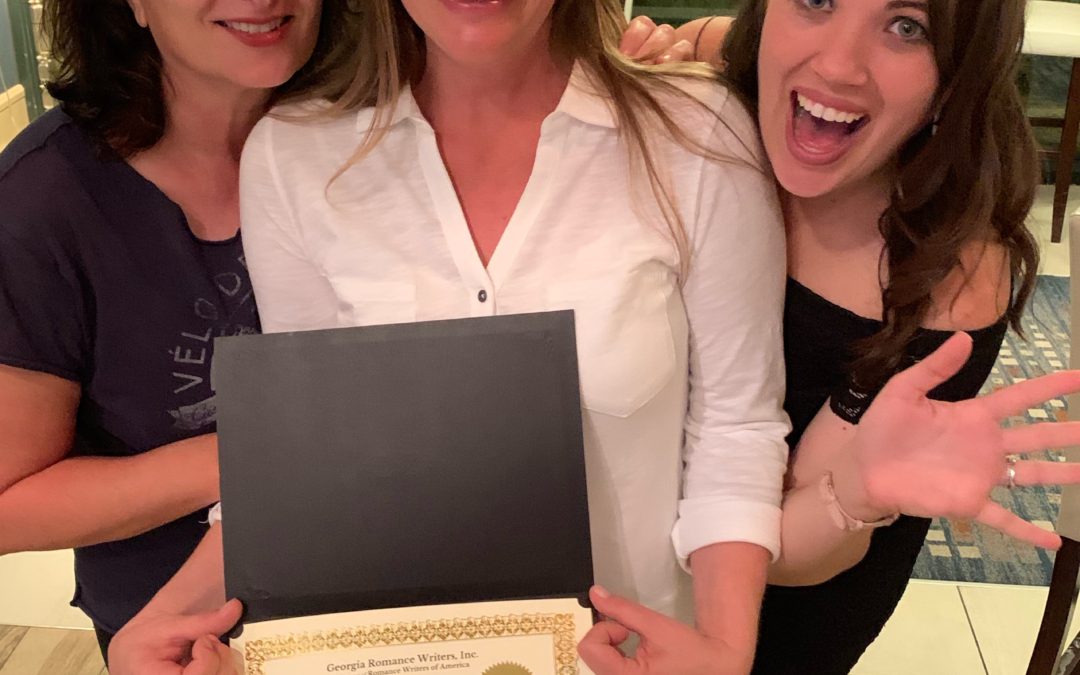 Blog number 5- Jaye Hawks! ´Tis I, here to report on the simply fabulous Moonlight & Magnolias Writers Conference I had the pleasure of attending earlier this month in the fine city of Atlanta, GA. Back in July at the Nationals, a savvy little birdie by the name of Karen K. whispered over brimming wine glasses that this smaller, more intimate gathering of semi (and not so semi) dirty minds was a gem of a throwdown, not to be missed.

Natch, I took this esteemed author’s advice and booked my spot, banking on stuffing my already-full noggin with need-to-know industry tidbits, along with befriending another slew of cool cats in the biz like I had in the Big Apple.

Oh, and escaping the ol’ homestead for a nice long weekend. Did JC not tell you about her severely flooded basement last month? And the ensuing odor that (still) diabolically lingers? Hawks, word to your mama… I could not get my tush on that plane fast enough!

Happily, my little birdie was right on the money. MM was all this gal could hope for, and more. Thanks, Karen! Following are my fond recollections, succinct as I can make ´em.

Upon downloading the snazzy and super user-friendly cell phone app (“Whova”, a fabulous invention), I was able to peruse all 150+ attendees, including their bios and genres. I spent the (blissfully smooth, thank you Lord) flight scrolling through this impressive list, signing up for three days of in-depth workshops, and gleaning tons of info and handy dandy tips from the community chat room. I met my first new bud Jillian D. before I was even airborne (“Landing at 1:15. Anybody wanna share an Uber?”), making the hour-long drive to the hotel a lot more palatable and half the price to boot!

Once on Georgia clay and checked in, yours truly wasted no time settling into her room and plotting the remainder of the afternoon and evening. Because Thursday was a “travel day” for most, and the actual start of the conference Friday, not a lot was happening workshop-wise. In fact, there was but one session I planned on attending, after I downed a quick (and regretfully sawdusty) turkey burger and an unsweet iced tea in the quiet bar.

(“UNSWEET? WHAAAAT?”) Yes. As some of you may know, this sort of bizarre request is considered grounds for immediate mental evaluation in the Deep South. Never fear, JC held her ground and repeated herself. Thrice.

After choking down my repast, I met my next two amigos at the bar: writers Rachel Graves and Tracie Provost. Tracie was enjoying a salad and Rachel was savoring a dessert, psyching herself up for the workshop she was hosting, and which I was about to attend. We introduced ourselves and immediately hit it off like no one’s business.

This would be the norm for the next three days.

Well, dontcha know this first class was entitled “An Introvert’s Guide to Succeeding at Conventions”. And I attended! Oops. Didn’t take me too long to figure out this wasn’t exactly my wheelhouse, but, hey… I still enjoyed the heck out of Rachel’s encouraging talk.

Except for the part when she advised me and a sprinkling of other non-introverts to “sit there and don’t say a word.” Ha. Duly warned, we did as we were told, and hearty laughs ensued as she imparted words of wisdom to the more reserved folks in the crowd. Great class, RG!

After this session wrapped up, the real fun began.

As planned per the nifty chat room, a disreputable gang that would quickly develop into “The Posse” assembled in the lobby at six-thirty sharp, intent on heading to fields afar and sampling some tasty Cuban fare, an inspired choice by a shrewd culinary planner.

In no time at all, three cars were loaded and instant friendships were forged over killer mojitos and yummy chow. And, yes, we kinda took over the place. Please spare a shard of sympathy for the sweet young couple attempting to enjoy a romantic interlude, as hordes of raunchy writers guffawed and slurped down evil alcohol imbibements two feet away.

At this point, my mind is a little hazy and the table was sooooo long, so I apologize in advance if I missed anybody! But I know for a fact all these fantastic ladies were present and accounted for: Leslie Scott. Nickie Brock. Joyce Cade-Hitchye. Maisie West. Misty Moyer. Sandy Scherer. Tracie Provost. Kel Knight. Michele Glessner. Karen White. Michele Cobb. PJ Devere. Bethany Lopez.

Shit, sistahs, did we have a blast, or what? A hearty shout-out to all my fab new friends!

The first “official” day had dawned. Jackknifing out of bed, I squeezed in a six am workout before heading down to the Pitch Session workshop, smugly armed with what I thought was a honey of a pitch for the five editor/agent appointments I had scheduled with, starting at noon.

Hawks, I thank my lucky stars for the professional critiques and guidance of Tamara LeBlanc and Pam Binder, who gently but firmly imparted my pitch sucked whale balls. “Huh? Wha’? Where’s the story? What’s the plot? Girl, this ain’t telling us a gee-dee thang!”

Cowed, I hightailed it back to my room, panic-stricken. Dagnabbit, I had less than two hours to hone the mothereffer into something that made sense! Fingers flying, I got ´er done with five minutes to spare, ending up with what I considered a much-improved and lucid synopsis of my sexy second tome. True, this hair-pulling “Do Not Disturb” session caused me to deep-six two morning workshops I’d been eager to attend, but the pitch was the priority!

JC is thrilled to report not only were my efforts well received, all five pros were intrigued by my story and requested the full or partial manuscript. Yay! Tamara and Pam, I seriously owe ya.

Once these nerve-wracking spiels were concluded and a quick lunch was inhaled, accompanied by a peppy and heartfelt speech by prolific author Susan Carlisle, I was free to relax and attend a few more workshop “musts”.

“Indie Publishing for the Newbie” hosted by Tawdra Kandle was first, and let me tell you—this with-it lady had my tiny peabrain spinning like a salad mixer in no time flat. So much to learn! So much to do! So much dough to spend!

Arghhhh… You mean I can’t just write a buncha smutty stuff and hope people will find it and buy it and I will become an instant gazillionaire?

Notebook filling up fast, I then headed to “Top Ten Social Media Tips for Writers” hosted by self-proclaimed media geek Tyra Burton. Okay. Anyone who saw my last blog (if you didn’t, check it out) knows I sorta blow at this crap. No way was I gonna miss this baby! Tyra really knew her stuff, and once again, my brain was throbbing on overload by the time I stumbled out of the room, puzzling social media jargon I barely understood leaking out my eardrums in a steady stream.

Question. Was three o’clock considered too early for a vino?

Oh, wait. Damn, no way—it was almost five already. Hell no, it wasn’t too early. Not only that, The Posse was champing at the bit in the lounge!

In position and quaffing down a few, our tight band of renegades rehashed our days and the myriad, mind-boggling things we’d learned from all the varied sessions. (Wish I could’ve attended them all…) Eventually, we climbed into the obligatory Hotel Shuttle, on our way to a funky sushi joint Leslie S. had researched.

Again, spare a soupcon of sympathy for our beleaguered, handsome young driver; stuck with transporting a clustereff of tipsy, raucous romance writers both to and fro, unable to escape our ever-escalating inappropriate comments. Listen: “To” was bad enough. “Fro?” I’m thinking the poor lamb will never be the same again.

The meal was superb, (except for that unfortunate orange-flavored roll, which was graciously removed from the bill) and we spilled back into the hotel bar, intent on a nightcap or three. Whew, what a day!

Pitches and another early workout behind me, I was free to roam from workshop to workshop, wowed by the knowledgeable speakers and humbled by the amount of info they professionally dispensed.

Leading off was “Facing the M Word: (Easy) Math for Authors” hosted by Kelsey Browning. Easy? Riiiight, Ms. B!

Next on the agenda was “How to Sell Books by the Truckload on Amazon” by Penny Sansevieri, which I had caught at the Nationals, and which was still just as dauntingly intriguing.

Then there was “An Intro to Ebook Self-Publishing” by Jim Azevedo of Smashwords, another bigtime informative session.

In the midst of all these frigid sessions (the rooms were nothing less than a meat locker), my friends and I listened to a very moving luncheon talk by superstar author Jennifer Armentrout, which gave us pause and renewed dedication to our craft. Wonderful speech!

Incredibly, the day had flown and it was time for the book fair/signing, followed by cocktail hour. At this juncture, I must mention a few more super ladies I had the pleasure of befriending: Eliza Peake, who gave me great advice. Bryonna Nobles. JB Hunt. Hildie McQueen. Brenda Lowder. Bee Snow. Amy Markstahler. Helen Aitken. Chudney Thomas. KG Fletcher. All so cool and talented… Looking forward to following their paths to success, for sure!

Scads of signed books in hand, I zipped to my room for a quick change, hoofing back down for cocktail hour in two shakes. This was a blast, as was the much-anticipated dinner and the Maggie Awards ceremony, honoring the best of the best of 2019.

Of course, The Posse snagged a primo table, and if you ask me, our dirty dozen rocked tha’ house. We sure cheered our asses off for the ladies on the podium! A huge “congrats” to all the winners, runners-up, and finalists. Next year, hopefully Mizz Jaye will be a contendah!

Well, Hawks, that was my summary of some truly great hours spent in some truly talented company. After sharing a ride and some scintillating conversation back to the airport with Lauren Rico and La-Tessa Montgomery, JC whiled away a few hours at the world’s busiest ´port, people watching and jamming to awesome tunes.

Heading back to reality and her keyboard, armed to the teeth with a boatload of new info and a whole heap of renewed literary vigor.

Yep, sure was one hell of a kickass conference.