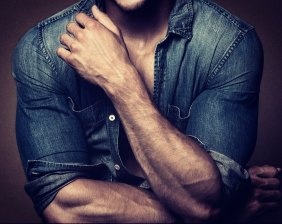 Hey all! Hope everyone is doing A-okay, and gettin’ through this first month of 2020 with flying colors. Or, at least, puttering colors. Me, I’m happy as a pig in you-know-what because I FINALLY, FINALLY  FINISHED MY FINAL EDITS for book two, Need It. Worse.

Seriously, what a load off. Now on to fine-tuning book three, and beyond…

Loathe to dwell on the downside, I will not be mentioning my puzzling-as-hell online Instagram class with its diabolical daily assignments, nor the massive and complicated marketing schedule my team has laid on me; both of which are seriously messing with my overloaded gray cells.

Yeah, gonna deal with that kerfuffle in a bit. (I swear.) Meanwhile, I thought for this blog I’d focus on one of my all-time favorite topics: male forearms.

I mean, just look at that photo, willya? Who with hot red blood coursing through their veins can’t get into a different sort of veiny action of the muscly and masculine forearm kind?

Confession: JC has possessed this particular body part fondness for many a year, Hawks. Yessiree, mannnny a year. Just ask my good ol’ buddy Elizabeth, who can vouch for the following tale with hand on the Bible.

That would be the Watson Forearm Tale. Not only was Miss Lizzie a witness for ‘part one’ (the writing), she was also present for ‘part two’ (the receiving).

It was a steamy and sultry summer afternoon in JC’s flush of youth. Twelve? Thirteen? Fourteen? The details are sketchy, but rest assured— I was but a babe in arms when I came up with the bright idea to pen a lust letter, uh, I mean a fan letter to my hero, the golf legend Tom Watson.

For those of you too young to know of whom I speak, at that time Mr. W. was at the pinnacle of his game, winner of many a shiny cup. The Masters, the U.S. Open, the British Open, you name it.

But, wait… Why a freaking golfer, and not a hot TV star or musician, you ask? (Trust me, those would soon follow, in droves.)

The answer is simple. My Pop was a maniacal worshipper of the ball and club, watching every tournament religiously and zealously. Additionally, he had supreme control of the boob tube. It stood to reason his resourceful daughter would have no choice but to focus her tender attentions on a man with an iron stick, so to speak.

Not content to merely gaze, belly on carpet and chin in hands, at the charming and gap-toothed Tommy, it didn’t take long for JC to decide this fine athlete deserved an impassioned note of praise and support.

I mean, walking eighteen holes in the harsh elements is a lot of work, people. Not to mention all the tormenting mind-fucks the sport entails!

With the stealth assistance of her stalwart pal and a telephone book-thick tome of Who’s Who addresses found in the local library, (yes Virginia, there really was such a thing), this teenage sleuth methodically acquired the details of Mr. Watson’s place of residence.

With dispatch, a pretty piece of prose was created in her bedroom bunker, far from her parent’s stern eyes. My friends, if only, if only, yours truly had possessed the wisdom and wherewithal to save herself a draft!

Oh, the fun we would have…

But being an eager and pockmarked greenhorn, such future planning naturally did not occur. So, the letter was sent off, with its heartfelt gems lost forever. Except to the recipient, of course.

Or should I say, his wife.

That would be spouse number one, I believe.

For you see, it was Wifey who wrote back, on that golf-grass-green, fancy-shmancy, thick-as-cardboard stationary. Wrote back! Yes, it’s true… JC actually received a response from the famous Watsons; a smooth “thank you” for being such an ardent fan and lover of the game.

Hawks, it was a day never to be forgotten… Liz and I screeching like magpies as we clocked the colorful preppy envelope stuck amongst the usual bills and boring crap; our spindly bods racing to a tall hedge to tear it open sans parental detection.

Yes, it was a most gracious acknowledgment the lady of the house returned. Polite. Well-written. Sincere.

“Dear Miss J, Thomas and I truly appreciate your…”

All very proper and aboveboard, classy. What the missus didn’t touch on was the protracted and fawning focus centered around her husband’s yummy forearms.

Yup. This is where I’m going with the arm thing.

As mentioned, the details of my awkward missive are vague. Vague except for one major focal point, which akin to that exotic midwestern locale remains burned in my brain: The Subject’s tanned and buff arms. That’s pretty much all I, or Liz, can recall of the thing. My drooling praise of the man’s nine-iron-honed guns.

Following is what I can vouch to be a near spot-on, direct quote:

“I LOVE THE WAY THE SUN GLINTS OFF THE GOLDEN HAIR ON YOUR FOREARMS.”

Yikes. Can you actually believe this? Hand to God, it’s bizarrely and rip-roaringly true.

To this day, I remain convinced by the cool, “hands-off” response penned by the object of my lust’s spouse, the good wife believed the impassioned lined notepaper she held in her manicured hand hadn’t been drafted by a lank and greasy preteen, but rather a flagrantly-bold hussy of at least eighteen, curvy and nubile, dead-set-determined to get her man.

I still have the letter. Trust me when I say “cool” doesn’t even begin to cut it.

Not that I blamed the lady her standoffishness, her subtly veiled possessiveness.

JC has always been, shall we say, a rather… creative writer. And listen, you can come up with a whole shazitload of adjectives for select male body parts, if you put a little effort in.

Anyhoo, that’s how this girlie’s obsession with fine forearms began—sprawled on an itchy chocolate-brown rug back in the day, mesmerized by glistening little golden hairs lying over sun-burnished skin.

And I ain’t gonna lie. I continue to love me a smokin’ set of guns!

Thanks for the memories, Tommyboy. Still got that letter?

Until next time, Hawks. Remember, sharing is caring… Forward this on to anyone you see fit! And don’t forget to stay in touch…